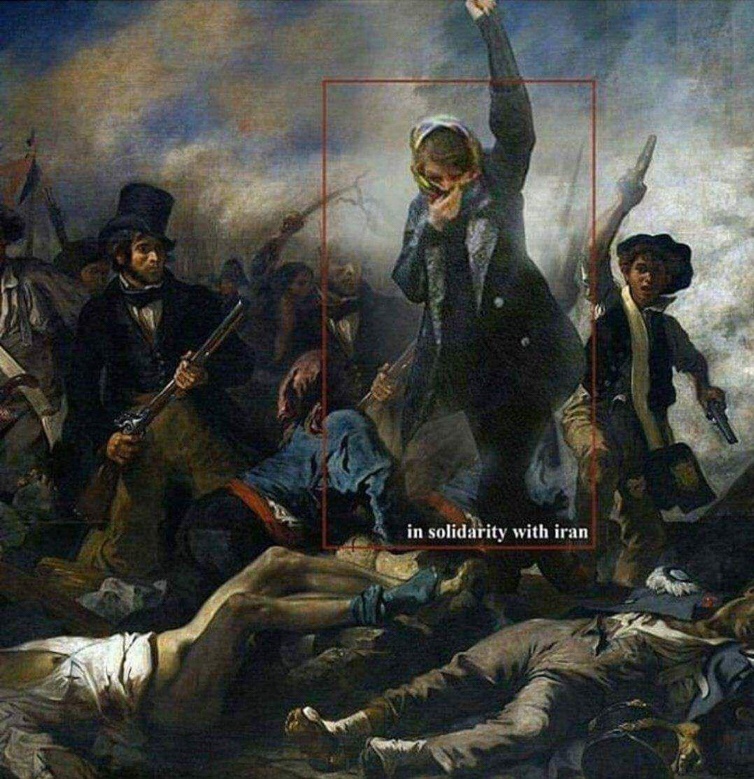 Iran’s social classes have experienced a chaotic change after the 1979 revolution, and eventually gave birth to a new filthy group of lumpen-bourgeoisie who stand between the upper and middle class, sucking the blood of the lower class to get richer and sucking the dicks of the Islamist upper class to stay alive. Lumpen-bourgeoisie group, I don’t call it a social class, consists of a group of opportunistic, graceless and unthinking people who sees nothing but their own individual benefits. They have always stayed silent during protests and supported the regime with their wealth.

Lumpen-bourgeoisie is quite a recently made group. Before them, we had lumpen-politariats in power. Before the revolution, Iran was a capitalist country with three distinct social classes. It was not surprising that people felt the urge for a socio-democratic regime, so they revolted. However, the results were not promising. Socio-democrats were trampled by Islamists who snatched the revolution. Right after sitting on the throne, Islamists started mass murders, imprisonment, daily executions, assasinations and enforcing Sharia laws including mandatory hijab. Yet, they promised socialism. The class changes had already started. Clerics who were proletariats with no power in the former regime suddenly jumped to the upper class, started to rule the country. The classes started to form more clearly of a capitalist society. An upper-class including Islamists, particularly clerics, in power, a middle class with lawyers ,doctors, univeristy lecturers,etc. whose status defined their class, and the lower class including workers with lower incomes. However, it was not as simple as this! Another group started forming, a lumpen-proletariat group including unemployed and thugs. The upper class were defenseless against internal and external threats. The other classes had intellectual resources and man power. So, the regime (the upper class) started utilizing the lumpen-proletariat group against the middle and lower classes as protection, giving birth to Basij and the Revolutionary Guards. Basij and Revolutionary Guards were the best defence with no demand! They assasinated intelectuals, silenced people and terrorized the whole nation. Best free fearmongers the regime could get. As time went by, these groups gained more power, both economical and military, forming a wall between upper class and other classes. Although, the international sanctions and the internal and external infamy slowed their expansion.

As IRGC and Basij fell short, it was time for Lumpen-bourgeoisie group. The regime started utilizing normal people, decent people you would think, but not really! Having experienced economical issues, the middle class started disappearing. Some moved down to the working class and some moved towards the upper class, but have never reached it and will never reach it, but they got richer and richer everyday, while the lower class got poorer and poorer. This class is the lumpen-bourgeoisie, a group lingered between upper and middle classes with great dependancy on the lower class to get richer and great dependancy on the upper class to stay alive. In return, they provide protection for the upper class with their wealth. They are so pragmatic that they would follow the regime to the end of the abyss, and will not let go of the lower class either. To me, they are the most sophisticated. They don’t fight for anything, they are unthinking, yet they will cling to anything to hold their position. This group can include real estate owners, business owners, bank managers, teachers, football players. It does not have any job classification. It all depends on the people’s choice and their wealth! Some with wealth have chosen to go up and duel in this group. They don’t necessarily believe in the regimes indoctrines, nor they believe in humanity and equal rights. They would pretend they are Islamists where needed by the upper class, they turn a blind eye on the protests and never join the poeple not to risk their filthy hypocritical positions.

The situation of Iran is somewhat between capitalism and feudalism, where religion and wealth rules and people suffer under the pressure while lumpen-bourgeoisie families don’t really feel any trouble, have no boundaries and live in welfare. The first generation of lumpen-bourgeoisie are the leaders of the group with their wealth and hypocritical behaviour, while their second generation live in peace and prosperity, mostly without any jobs, with extreme wealth of their fathers they enjoy their lives in Iran.

A few meters away, the lower classes are endeavouring to survive, they risk their lives in the protests for a better future, for a secular democratic regime, a free country where everyone lives equally without fear. On their shoulders they hold the whole country, while bleeding from the lashes of Islam, and the bites of the lumpen-bourgeoisie. Still, they care about their country and their brothers and sisters. They strive but they are graceful. They will never let go of their country, and the upper class and the lumpens must rememebr that if the working class let go, they will all go down!