Growing up in Iran, I had been exposed to constant Islamic indoctrination, and I had questions, lots of them. Mostly simple ones. What has always fascinated me was the questions of Why god is so angry at us? If he loves us (which I found that he doesn’t love anyone but himself in the most egocentric way possible), why he threatens us? What kind of sick game was this? Why would my uncle go to hell for drinking wine if wine is offered in heaven in abundant (actually in rivers!!)? Why shouldn’t I read the translation of Quran in Farsi so I can understand? If this god is so omnipotent, eternal and ever-present and immaterial, why does he bother himself with a man biting an apple, or drinking wine or? Half of my childhood was filled with fear and questions. But, I finally have the answer! and no fear of course!!

First of all, let’s see who created our God. The answer is a man. I particularly discuss about the Abrahamic god who is a man himself. He is anthropomorphized as a man or a father figure, and is referred to by masculine pronouns in the “holy books”. In my mind, when I was a child he was a man too, someone like Zeus, powerful and dominant, sitting on a bed of clouds. Abrahamic god is indeed a dominant despotic male god, and it roots from our nature.

Humans just like some other animals, particularly primates, live in groups, and instinctively a group requires an alpha to lead the group, to help them survive. Following the alpha and submitting to him has been in our nature, as it was a way of survival. Humans wouldn’t have survived without this way of life. Submission is in our nature! I know it sounds harsh because we want to be unique, rogue and free, but well… we are not! Throughout the history of man, the alpha have always had the power of food, sex and territory. As our cognitive abilities evolved, men in power such as kings secured more power for themselves by calling themselves gods. Then, they had the ability to authorize violence and oppression. Take ancient Egypt for example. These man-based gods, as they were the dominant male of their tribes, concerned themselves only with food, sex and territory. The three main requirements of survival. To ensure security of them, aggression, intimidation, territorial acquisition, sexual control and violence have been practised by all gods since then incontrovertibly!

When societies developed and moved forward, from nomadic to agrarian and to more complex societies, the role of the gods changed to reflect new life styles and concerns. The power of the gods grew to control greater masses of people (I highly recommend you to study the history of Israel, from polytheism to the Crusades.You will find rich examples on this matter). Just like Greek or Nordic gods, the Abrahamic god started with scaring people of natural forces, punishment and offering some sort of vague prize and then it evolved to a pervert but smart businessman in Islam. The god of Islam, Allah, monopolized sex, food, territory, commerce and money flow for one dominant male in the Arabia, Mohammed! I think we all know how he became dominant by presenting one dominant god! After Mohammed, the story continued, Muslims captured territories, women, food and wealth.

Religions have been created and empowered by monarchs throughout the history to ensure survival, from Stone Age untill now, particularly by likes of David, Constantine, Mohammad, Suleiman, Ismael I, etc.

So, next time you wanted to say prayer, go to church or keep the sabbath, just think who’s controlling you, who’s the alpha? Is it really about morality and salvation or is it about power and survival? Are you a pure soul in the eye of God or are you just a pawn in a game of power? 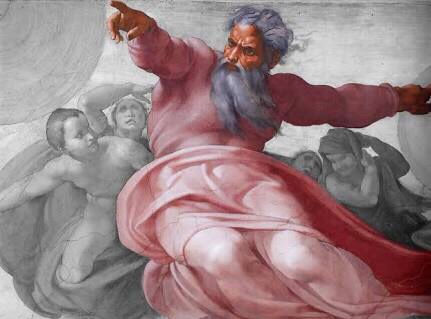