Imagine a cave where people have been imprisoned from birth. These prisoners are chained so that their legs and necks are fixed, forcing them to gaze at the wall in front of them and not look around at the cave, each other, or themselves. Just as we are born into a religion. We are indoctrinated in one specific religion constantly and we are not allowed to look at any other religion or ideology. In this analogy, we consider the cave as religion or a religious society which can be as small as a nuclear family or as big as a nation. The prisoners are the people who are born into the religion or religious society, and the outside world is the state of deconversion to non-religion.

Behind the prisoners in the cave is a fire, and between the fire and the prisoners is a raised walkway with a low wall, behind which people walk carrying objects or puppets “of men and other living things”. The people walk behind the wall so their bodies do not cast shadows for the prisoners to see, but the objects they carry do (“just as puppet showmen have screens in front of them at which they work their puppets”). The prisoners cannot see any of what is happening behind them, they are only able to see the shadows cast upon the cave wall in front of them. The sounds of the people talking echo off the walls, and the prisoners believe these sounds come from the shadows. Socrates suggests that the shadows are reality for the prisoners because they have never seen anything else; they do not realize that what they see are shadows of objects in front of a fire, much less that these objects are inspired by real things outside the cave which they do not see. Let’s go back to religion. When people believe in a religion, they consider it as the ultimate truth, fact, reality! Any type of shadow that the religion casts in front of them is their reality. They have not seen outside the religion. They have not seen or been educated in anything else but their religion. One thing which is really important to consider in the allegory of the cave is the lack of education.

Plato then supposes that one prisoner is freed. This prisoner (a believer in our case) would look around and see the fire. The light would hurt his eyes and make it difficult for him to see the objects casting the shadows. If he were told that what he is seeing is real instead of the other version of reality he sees on the wall, he would not believe it. When someone questions their religion, and is trying to walk out, it is painful! The information outside of religion is overwhelming. Yet, you won’t consider it as truth, because the reality is still the religion. Plato continues, the freed prisoner would turn away and run back to what he is accustomed to i.e. the shadows of the carried objects, religion in our case. Plato writes “… it would hurt his eyes, and he would escape by turning away to the things which he was able to look at, and these he would believe to be clearer than what was being shown to him.” Coming back to the familiar reality of religion is way easier than leaving it with the overwhelming facts questioning the reality that we have known since birth. So one would never leave the cave so easily.

Plato continues: “Suppose… that someone should drag him… by force, up the rough ascent, the steep way up, and never stop until he could drag him out into the light of the sun. Slowly, his eyes adjust to the light of the sun. First he can only see shadows. Gradually he can see the reflections of people and things in water and then later see the people and things themselves. Eventually, he is able to look at the stars and moon at night until finally he can look upon the sun itself .” Only after he can look straight at the sun “is he able to reason about it.” When the person outside of religion gets used to the harsh facts, and realizes that his shadows were not real, he looks at the bigger picture. He remembers, analyses and reflects. Then, he can distinguish the reality, no matter how harsh it looked in the begining.

Now that the man is outside of the cave/religion, he thinks that the world outside is superior “he would bless himself for the change, and pity [the other prisoners]” and would want to bring his fellow cave dwellers out of the cave and into the sunlight and show them the reality outside of religion. However, as his eye are accustomed to sunlight now, he would be blind when enters the cave. The cave would be too dark for him to see. Nothing inside the religion would make sense anymore. So, the prisoners, according to Plato, would infer from the returning man’s blindness that the journey out of the cave/religion had harmed him and that they should not undertake a similar journey. Socrates concludes that if the prisoners were able, would therefore reach out and kill anyone who attempted to drag them out of the cave.

Leaving one’s religion requires some extensive force, whether internal or external and it does not happen overnight. It’s a difficult process where one must leave their familiar reality for a new and often harsher reality. When you eventually leave religion, you come back to tell others about the actual reality and how beautiful it is. However, you sound so strange to them that they would assume that the world outside of religion was dangerous, galling and antogonizing. The believers would defend themselves by verbally or physically abusing you, and in extreme cases would kill you if they could. 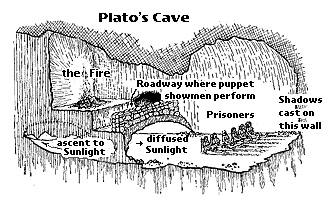 5 thoughts on “Allegory of Cave: leaving the cave for actual truth”