Sartre describes that people are condemned to freedom. Although, they deprive themselves of freedom by making bad choices known as “bad faith”. They deceive themselves into thinking that they do not have the freedom to make choices because of fear of any potential consequences of making a choice. 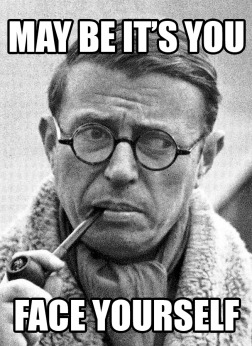 By sticking with the safe, easy, default ‘choice’ and failing to recognise the multitude of other choices that are available to them, a person places themselves at the mercy of the circumstances in which they happen to find themselves. Thus, the person is more akin to an object than to a conscious human being, or, in Sartrean terminology, more akin to a ‘being-in-itself’ than to a ‘being-for-itself’.

According to Sartre: “Human reality is what it is not, and it is not what it is” As an example a doctor who wishes to be a farmer is not a doctor but is a farmer. However, in anguish has chosen to become a doctor under circumstances. This is bad faith. So the doctor will live the rest of his life deprived of freedom.

It is important to note that this notion of existentialism considers that individuals are always free to make choices and shape their lives. Even under overwhelming or limited circumstances. Sartre believes that we can’t blame anyone but ourselves for bad faith. We have to face ourselves for making the bad choices. Some of the examples Sartre mentions are a waiter who doesn’t want to be a waiter, a woman who sees her date’s sexual signals but interprets them differently, and a couple who are in a relationship, but do not feel the innate freedom. All of these situations are ‘bad faith’ that happened because of bad choices the actors had already made.

Reflecting on my own life,  I see that I have chosen the innate freedom I have always been looking for, such as leaving Islam, taking on the path of atheism and publicly writing about it. However, I have also made choices under certain circumstances that have deprived me of freedom!!!

One thought on “Anguish of freedom”