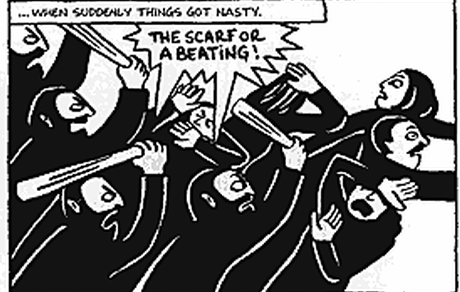 Has Islam liberated women? Has it given them equal rights?

Growing up, I was taught that women before Islam were low-class citizens and had no rights whatsoever until Islam came and liberated them.

In Islam, it is taught that pre-Islamic Arabs practised female infanticide because they considered girls as a burden, women were harassed sexually and were totally deprived of any rights and so on! These allegations are all based on hadiths and Quran, while there is not any other written evidence to rely on since after Islam  Muslims destroyed any books they found believing Quran to be the only book that humans had to read. Well… let’s call bullshit on all of these allegations, and try a more inductive approach.

Studying the history of Arabia and Islam, you cannot miss the significant role of powerful women such as Khadija, Hind and later Aisha. Khadija was 40 when she married 25 year old Muhammad, and already she had made a name for herself as a successful business woman! Wait what? A successful business woman? About 1460 years ago? but Quran claims that it liberated women.  So we should consider it true because Quran claims it?

Islam gave men more power with its angry male god. Abrahamic gods are all powerful jealous males who enjoy exclusive sex with infinite number of women and passing their genes. They are very similar to Zeus and some Nordic gods. Basically, they are offset copies. Islam put men in charge, gave them the right to marry several women, own slaves, rape them, take the wives of their enemies as trophies after battles, keep the right of divorce, beat their wives if they are disobedience. Islam doesn’t provide equality in social justice, politics, family, inheritance, economy, social class, etc. for women.

Some believe that Islam provided a spiritual equality. As in both men and women go to hell and heaven based on equal judgement. This is not even true. The punishments and prizes are different. A man gets 72 virgins and some young servant boys (WTF!) in heaven while women get their own husband. I’m pretty sure for some women, it’s going to be worse than eternal torture in hell. Another argument is that women can’t pray or enter a mosque when they are on their period, since they are regarded as najis (dirty).

How can you regard Islam as liberation while it regards that the blood money of a women if half of a man, so is her testimony value in a court, force women to cover their hair blaming them for men’s misdemeanors?

I support No Hijab Day in solidarity with my mom, my sister, my aunt, my friends and all other women in Iran who are forced to wear hijab and are deprived of their basic human rights and treated unequally. No Hijab day is on 1st of Feb. Join them on Youtube and twitter. Show your solidarity.